Driving sports card value 2021 is not all about the stats. The team a player plays for, the sport, the press, college pedigree, the player’s public image persona and likability, in addition to many more intangible traits all play a role.

However, at the heart of sports card price ascension is the statistics behind the player.

What’s important, many times, is that a rookie get out of the gate on an encouraging note. As a result, the player positively “brands” their image to collectors and sets forth the opportunity for card value to trend in a promising direction.

It could be reasoned that playing time as a rookie is vital towards a rookie card’s speedy rise of value.

With all this in mind let’s review how the early 2020 NBA draft picks are faring from a statistical standpoint.

Who’s been productive with these minutes?

Tyrese Haliburton and Payton Pritchard have been stacking the box score with their play. They both are present across six statistical 2021 NBA rookie leader boards.

Both LaMelo Ball and Deni Avdija have been helping there teams. Each show up five times in the statistical rookie leader lists.

James Wiseman and Cole Anthony have had plenty of press and are living up to it. They both show up four times in the rookie leader boards.

The top 2020 NBA draft pick Anthony Edwards is progressing and leads all rookies in scoring at 13.67 points a game.

Payton Pritchard. Payton is getting the playing time and producing. And his basketball cards are still under the radar at this time. Pritchard has the college pedigree (Bob Cousy 2020 NCAA winner), the opportunity, and the early stats to command a rise in sports card value. Add in the fact that he plays for such an elite franchise brand in the Boston Celtics… all the earmarks are there for success. 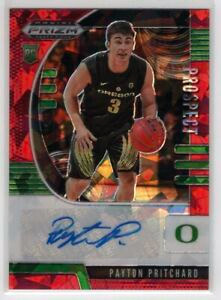 LaMelo Ball. The expectations were certainly lofty for this lad, but LaMelo is living up to them. Ball represents the number two rookie in minutes played and shows up five times in the rookie statistical leader boards. LaMelo is 2nd in points scored and efficiency, 1st in assists and steals, and 5th in rebounding. Ball showcases all the talents for a perennial all-star NBA career.

James Wiseman. Talk about opportunity. James was drafted by the uber talented Golden State Warriors and currently part of the starting five. Wiseman is 1st in rebounding and blocks and 3rd in points scored and efficiency. No surprise that his sports cards are already in high demand. And with all that talent surrounding him, Wiseman should continue to post productive numbers.

Tyrese Haliburton and Deni Avdija. Both of these rookies are playing and producing.

Playing for the Sacramento Kings doesn’t excite collectors, so we’re currently fading Tyrese a bit. However, if Haliburton keeps putting numbers up, he will be hard for collectors to ignore.

Additionally, here’s a link to a site that tracks rookie statistics.

Subscribe Now for Exclusive Access to Our Free Monthly Sports Card Investor Email Report
You will receive expert analysis and trending news on what cards to buy and sell, exclusive giveaway offers, and much more.